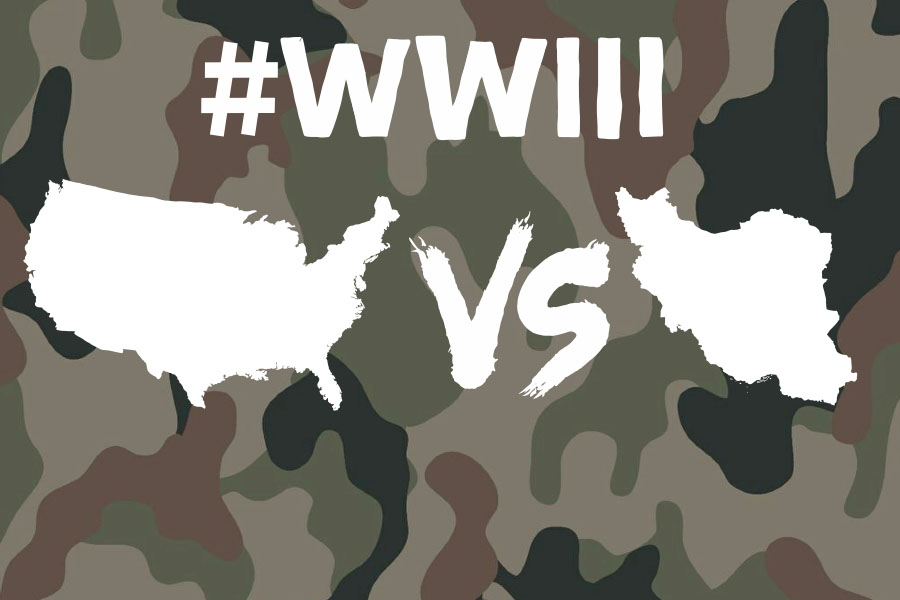 #WorldWarIII began trending on Twitter on Friday, Jan. 3. The rumors for the supposed ‘war’ started when U.S. president Donald Trump ordered an airstrike to the Iranian General Qasem Soleimani, the second most powerful man in Iran overall. The attack was ordered because the general allegedly planned multiple terrorist attacks on the American people.

The media was in an uproar, debates circled around social media and memes appeared on all social platforms. Rumors sprung about supposed attacks, invasions and drafts, effectively scaring the public. While people on Twitter jumped to conclusions on both ends of the spectrum, U.S. history teacher Charles Andrews kept level-headed and formed his opinion on the subject matter.

“I had to talk to so many people like ‘Relax, nothing’s going to happen,’” Andrews said. “We [are] never going to get a massive attack here, they don’t even have the capability of that and we weren’t going [to] invade Iran because no one wants that, Trump doesn’t want that. [It’s] not going to happen.”

As more facts and articles were released, students were able to watch from the sidelines and develop their opinions on the situation. Not wanting the worst outcome, various students advised the idea of a war to be discarded and that the president leave Iran alone due to the already present issues such as their polluted air and oil plus other conflicts they’re fighting through.

“I don’t really think [it’s necessary],” freshman Nick Foster said. “Unless Iran provokes us, we really should just let them be and let them figure themselves out. Their people are already protesting, [so we should] just completely disassociate with Iran.”

As the topic gathered more attention, major news companies such as CNN, the Washington Post and ABC jumped on the chance to write about the controversial event. Although World War III was only rumored to happen, a fraction of articles treated it as a fact, and, to an extent, unnecessarily dramatized the event.

“The media is a business, their job is to sell advertising and get viewers so they exaggerate news and present the worst case scenario,” Andrews said. “So for them to go ‘Man is this going to lead to a war for three or four days’ [shows] some of them were ignorant and didn’t know that wasn’t a possibility. They wanted it to be a possibility for the attention of it. That’s a danger in journalism, you have to report both sides objectively [and] fairly.”

A big aspect of the trending #WorldWarIII were the memes joking and minimizing the severity of the situation. Some talked of the unlikely draft, others bordered racism and some even mentioned previous world wars. The media was at a crossroads, as several thought the jokes were funny, while others thought they inappropriately displayed the serious event.

“People are out there risk their lives every day having family members that don’t know if they’re coming home or not,” senior Dylan Gerun said. “So I believe that, yes, there’s going to be people that make fun of it. It’s because they don’t realize the circumstances of being in Iran, dealing with all those people and seeing if it does go to war. I believe everyone that makes those memes [are] scared because you never know what’s [going to] happen.”

Although students are frightened by all the news happening around them, some remain hopeful that the situation was exaggerated and blown out of proportion and will soon dissipate. They hope in years to come this will just be something they can remember as a ‘what if’ moment.

“[Hopefully] it’s just kind of one of those moments like ‘What’s going to happen next,’” senior Katie Chappell said. “[That] it doesn’t escalate any further, which would lead to more conflict in the Middle East that we definitely do not need. I hope it’s something they [won’t] even need to put in a history book, [that] it’s insignificant because that’s the last thing [anyone needs].”