Winners of Mr. Farmer to advance to district-wide pageant 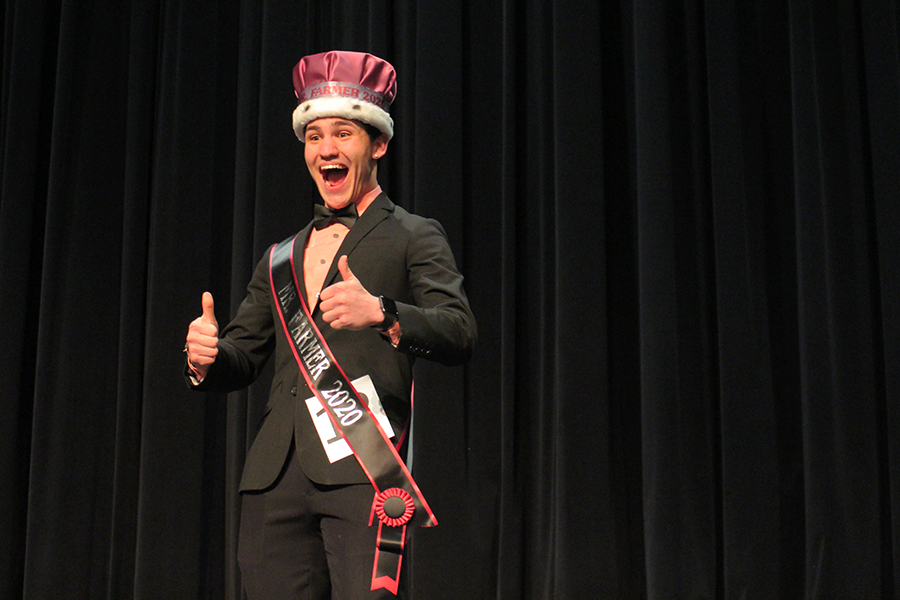 First place winner of Mr. Farmer senior Jimmy Piraino poses with a thumbs up after being crowned.

The Mr. Farmer pageant contestants competed on Wednesday, Feb. 26 in the Stuver Auditorium for a spot in Mr. LISD. The competition was separated into five categories including introduction dance, swimwear, talent, formal wear and a question and answer for the top five contestants. From that, the judges picked the top three: second runner-up senior James Thang, first runner-up senior Devante Hill and Mr. Farmer, senior Jimmy Piraino.

“The process was fun,” Hill said. “I enjoyed the whole experience. There’s so many great guys in there that were really passionate about winning.”

Long rehearsals for days before the competition were tiring but exciting for the boys. Several aspects were enjoyable to the seniors, like the talent performance and formal wear.

“My favorite aspect would definitely be the end result because we all gave it our best, we practiced so much for this and just to see how we were all placed and how it all went down,” Hill said. “I’m kind of contradicting myself but I would also say the end result [was my least favorite] because you hate to see the people work hard not get placed.”

Piraino, who participated to represent theater, felt at ease with being up on stage with his experience of acting in plays. For the talent portion, he sang “Man or Muppet” from The Muppets, which made the audience smile and laugh because of his charming performance.

“I [was] fairly confident because everyone was really nervous [and] I just wasn’t,” Piraino said. “It just [felt] like another performance, so I think that might have been it. If I wasn’t confident going into it, I would have already lost.”

With a variety of people participating in Mr. Farmer, all contestants showcased their contrasting personalities and interests to stand out and catch the interests of the judges. One contestant can be a quiet and shy student, while another can be confident on stage.

“I thought [Piraino] was great, [and] he’s very talented,” StuCo adviser Allison Stamey said. “Last [year’s] winner was another theater guy. They have that talent and charisma when they get out there and dance or do whatever. He was great.”

Piraino, Hill and Thang will take part in Mr. LISD along with other senior boys from other LISD high schools to compete for a scholarship.

“Winning to me [means] putting everything that you got into where your results were, whether that would be a win or a loss,” second place winner senior Devante Hill said. “If you give it your all, I feel like that’s a win to anybody.”