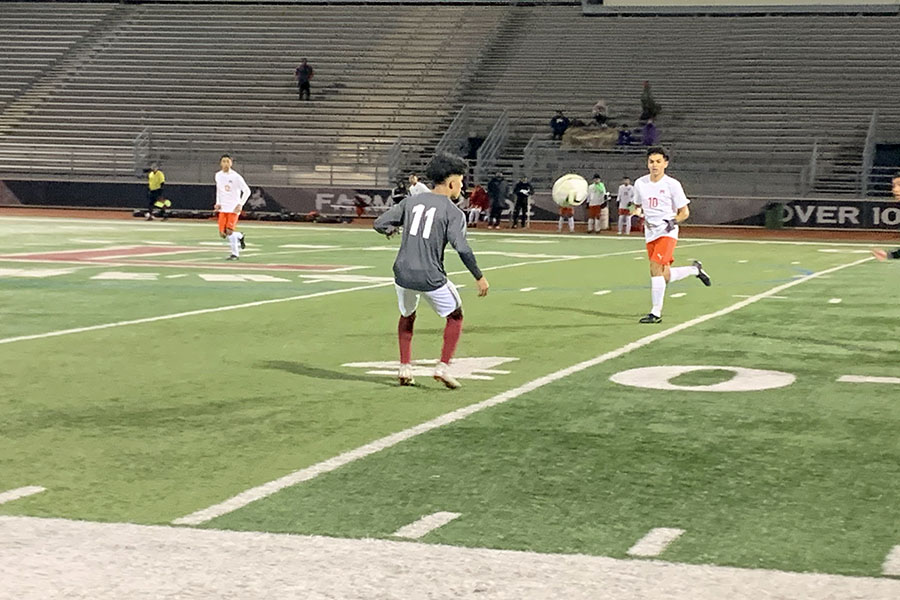 Junior Tony Cantoran (11) prepares to receive the ball at the home game against Irving MacArthur on Tuesday, Jan. 29.

With the boys’ soccer team having a record of [8-1-1] and starting the season with a loss, they continued to improve as a team and accomplish wins for the next couple of games. Winning the Berkner tournament in mid-January gave the players a sense of accomplishment before beginning district play last Friday, Jan. 25 against Flower Mound.

“Winning the tournaments is always a bonus,” boys’ soccer coach Brandon McCallum said. “But the main goal is to gain experience and keep progressing as a team. [This year], the players have been very committed and determined, which hasn’t always been the case in previous seasons.”

This year the team became closer compared to the previous year where the bond wasn’t as strong. Being ranked number 18 in Texas among top high school soccer teams brings pressure for the players to do their best and show their capability to work as a unit.

“I’m excited to see what this team does,” senior soccer captain Ethan Carbajal said. “We have a very special group this year, we’re ranked nationally [and] this year we have a bunch of returning players. It’s very minimal so we’re building up chemistry with the younger guys.”

Maintaining a healthy relationship among the players is needed to see success in games. Everyone on the team has to do his part, regardless of size. From a player helping another player up to the captain giving a motivational speech, each individual athlete is needed to make the team work.

The players needed to learn to act more disciplined as they are held at higher expectations than in previous years. The boys’ soccer team hopes to win the upcoming away game against Coppell on Friday, Jan. 31 at 7:30 p.m. then move the focus on making it to state.

“We each hold each other accountable and if someone is not having a good day, we encourage them [to do their best],” junior soccer player Brody Webster said. “But we need to improve on taking things more seriously.”