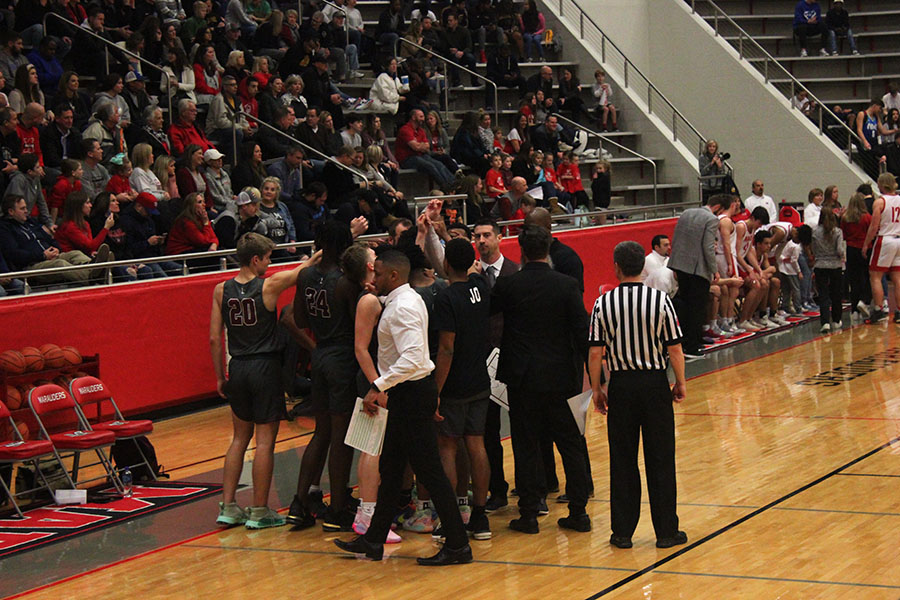 The boys' basketball team huddles together during the game against Marcus High School on Tuesday, Feb. 11.

Six weeks into the district season with an overall record of [21-11] and a district record of [9-3], the boys’ basketball team clinched a spot in the playoffs after defeating Marcus High School on Tuesday, Feb. 12. The team hopes to continue its five-game winning streak on Friday, Feb. 14 against Flower Mound High School and perform well at playoffs in the upcoming weeks.

During tough games, the team relies on reinforcing its sense of unity and togetherness to achieve a better outcome. The team hopes its bond will improve play on the court and lift the competitive spirit.

“[What helps us is] coming as a team and being together and knowing we are there for each other, it picks each other up,” senior point guard KJ Pruitt (2) said.

“We’ve had some struggles [and] some adversity,”  Miller said. “I think it was good for us because the struggles we went through at the beginning of the season, we figured how to get through them. So it’s good and bad and it’s tough but not tough because it’s how you grow.”

The team believes preparation is as important as performance, using games as representation of their work on the court. Believing more than on-court practice is needed, the team focuses on what’s most necessary for success.

“Coach always tells us to win the day, pay attention to the details, watch film and go hard in practice,” sophomore shooting guard Keyonte George (1) said. “What we do in practice will translate to a game.”

Their three game losing streak earlier in the season to Marcus, Flower Mound and MacArthur High Schools ended after defeating Coppell High School on Tuesday, Jan. 28. Believing those losses were a part of the competitive season, Miller ensured the upsets would only strengthen the team.

“I think every year you expect to have adversity,” Miller said. “Whatever it looks like whether it’s losing games or this and that and not playing well there’s always adversity. You know it’s coming, it’s all about the response.”