Girls' basketball team ends its season on a high note 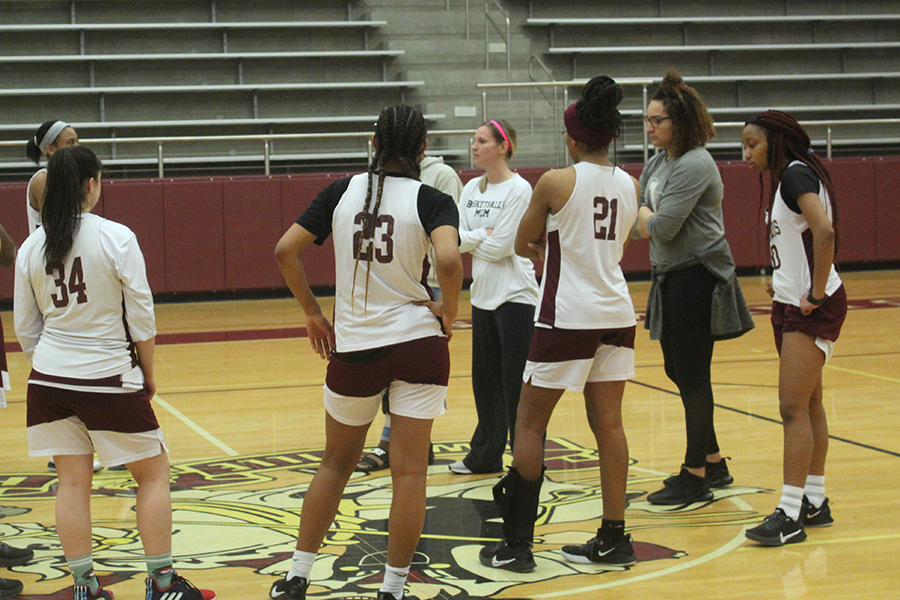 Juniors Kaitlyn Blair, Eryka Patton, Laila Lawrence, Haley Allen and the rest of the team listen to a speech given by head coach Sally Allsbrook during practice on Wednesday, Feb. 19.

The girls’ basketball team was eliminated in a playoff game against Duncanville with a final score of 52-36 on Thursday, Feb. 20. This team ended its season with a [19-12] record overall and [10-4] in the district. Despite the loss, the team kept its spirits high. With an opening win of 72-7 against Grand Prairie and a well-earned win of 56-52 against MacArthur, this season was the start of a stronger team.

“They’ve been some of the best groups of kids I have had the opportunity to coach,” coach Sally Allsbrook said. “I think the girls are focused and keep trying to find ways to win for each other.”

The team’s goals throughout the season were constantly shifting as the team overcame each one. At first, it was to have a winning record, then it was to come out on top against district rivals and when the opportunity showed, the players had set a new marker.

“The toughest aspect has to be when we’re tired and we have to push through when sometimes we didn’t think we could,” junior shooting guard Haley Allen (30) said. “[Our goal was] to win our first round game.”

Training made up a huge part for their preparation for the playoffs. The players put their sweat and tears into making sure the team was ready to work toward securing a spot. There was adversity within the team that they had to power through to win their games.

“We have had to prepare for all of our district games.” Allsbrook said. “We have never had [an easy game]. The playoff games are always tough, we [didn’t ever have] enough time to get ready.”

With the season over for them, their goals are to regroup and build a better team with the incoming members and hone in on their skills and unity. Losing their seniors next year will give them a slight disadvantage, but will make it easier to strengthen the team for their next season.

“[To prepare, we need] to keep working as a team,” junior point guard Kaitlyn Blair (25) said. “We can’t play individually and we need to work together.”